10 most wildly expensive materials in the world 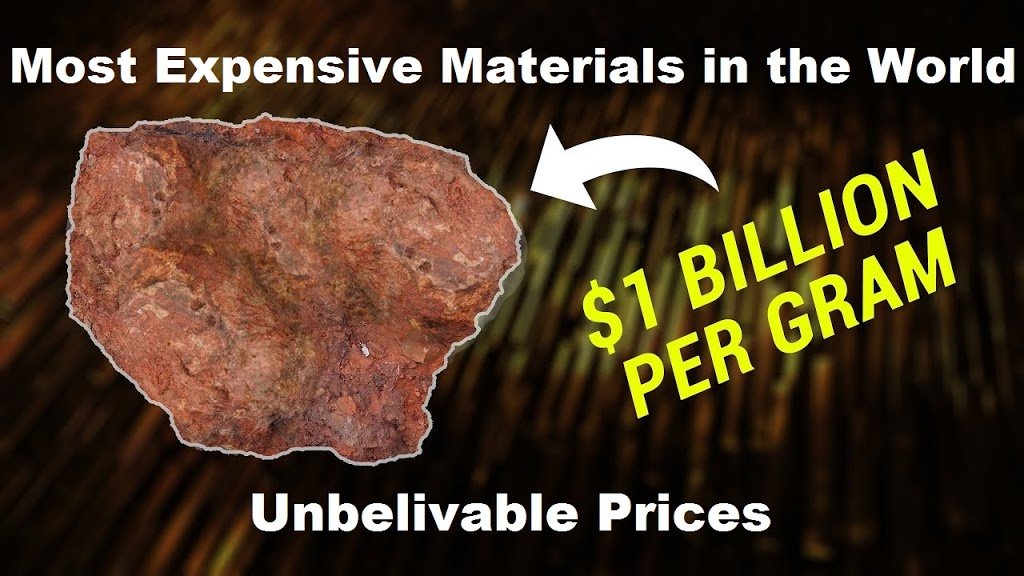 Hey! If you have a lot of money, there are plenty of crazy expensive things you can buy, like a $55 million watch, or perhaps a really great bottle of tequila for $3.5 million. Or, you can drop a ton of money on some of the most wildly expensive materials in the world. 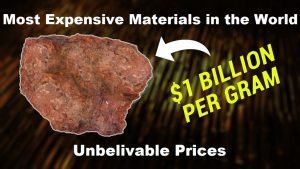 There are dozens of natural and man-made materials found around the globe that will cost more than you could ever imagine. Which is what brings us to today’s topic, the most expensive things or materials that are found on the planet Earth!

Lysergic acid diethylamide, otherwise known as acid or LSD, is a man-made and very illegal hallucinogen.

It’s said to amplify the senses and can cause people to see bright colors or even things that simply aren’t there. It’s most commonly ingested on a small piece of paper, and for a fairly common drug, it’s actually incredibly expensive.

The street price of LSD starts at $2,500 per gram, but can reach as high as $15,000. According to addictionresources.com, an average hit consists of 50-150 micrograms of the substance, which will cost the user anywhere between $2 and $50.

If you’ve ever fancied buying some plutonium, then you had better get saving up because it’s $6,000 per gram.

Plutonium is a radioactive metal which comes from the nuclear decay of uranium, but sometimes it can also be found naturally. Its uses include nuclear reactors and nuclear weapons, but it’s also used to power satellites and space crafts that need a long-lasting energy supply.

Plutonium was actually used in the cores of the first atomic bombs, including the devastating bomb that was dropped on Nagasaki, Japan in 1945. If you do decide to spend your money on plutonium, be extremely careful.

Radioactive materials are obviously super dangerous and plutonium can accumulate in your bones which doesn’t sound fun at all. You’ll probably struggle to get your hands on any, though.

Plutonium is a controlled substance and even if you did manage to buy some, transporting and storing it would be very difficult to do safely.

At around $13,880 per gram, Soliris is the most expensive drug in the world.

It is used to treat an extremely rare but life-threatening disease called atypical Haemolytic Uremic syndrome, or aHUS. This horrible disease attacks red blood cells and is very difficult to treat without Soliris.

There’s just one problem, though. A single year of treatment will set you back around $450,000. There was actually another drug that stole Soliris’ crown as the most expensive drug on Earth back in 2015. Glybera was only ever approved for use in Europe, and a single year’s supply costs an incredible $1.2 million.

Despite its potential to make drug companies a lot of money, glybera was discontinued in 2017 because the disease it’s used to treat is so rare that hardly any patients actually needed it.

You may not have heard of taaffeite, but it’s an incredibly rare gemstone that has only recently caught the attention of collectors.

Austrian geologist Count Edward Charles Richard Taaffe is credited with making the discovery of the stone while he was sifting through a box of similarly colored Sri Lankan gemstones. That was in 1945 and since then there haven’t been many more taaffeite gems found, which is why the ones that do exist fetch a price of around $20,000 per gram.

Mainly found in Tanzania and Sri Lanka, taaffeite comes in many different colors ranging from red to purple. The red ones are the most sought after as it’s said that there are just ten of them in existence, but there’s a tiny amount of all of the total combined colors. In fact, if you took all the taaffeite gems that had ever been found, they’d only fill half of a cup.

Any guesses what the world’s most expensive liquid is? That’s right, ladies and gentlemen, it’s death stalker scorpion venom.

If you wanted to buy a gallon of the stuff, and I’m really not sure why you would, it would set you back about $39 million. Or, you’d have to milk a scorpion 2.64 million times to get that gallon. Instead, you could settle for buying a drop of scorpion venom smaller than a single grain of sugar for the bargain price of $130.

The reason death stalker venom is so expensive is that it’s full of components that are leading the way to important medical breakthroughs.

Its hefty price tag is also because the scorpions have to be milked one at a time by hand, and it’s only possible to get around 2 milligrams of the venom from every milking. Suddenly I’m wondering whether it’s too late to switch careers – milking scorpions must be pretty lucrative!

Tritium is a radioactive substance that sells for an incredible $30,000 per gram. It was discovered back in 1934 and can be used for self-powered lighting such as the ones you might find in watches, map lights, and navigational compasses.

It’s also useful for nuclear weapons because it enhances the efficiency and yield of fission bombs. Trace amounts of tritium naturally occur on Earth when cosmic rays interact with our atmosphere. But, most of the tritium that exists is made in nuclear reactors or with nuclear fission.

The last report from the only facility in the US to create tritium was released way back in 1996, and at that point, only 225 kilograms had been produced. No wonder it’s so expensive.

We’ve already mentioned a super rare gemstone, but this next entry is even rarer. In fact, it’s the rarest gemstone in the world. This is painite, and it can cost up to $60,000 per carat which is just 0.2 grams.

Painite was first found in Myanmar by a British mineralogist named Arthur C.D Pain, but he misidentified the rock he found as sapphire. It wasn’t until years later that it was finally discovered to be a new mineral species, and it was named after the man that mistook it for the more common sapphire gemstone.

Since it was first discovered there are only thought to have been two painite gems found, so the chances of you ever having the opportunity to buy one on the market are incredibly slim.

As anyone who likes to buy jewelry will tell you, the price of diamonds varies widely depending on their quality. 2-3 carats of average quality diamonds, which is 0.4-0.6 grams, tend to cost between $18,000 and $21,000.

But if you refuse to settle for anything but the very best, prepare to spend upwards of $100,000 for the same sized gem. The most expensive diamond ever found is the Koh-i-Noor diamond.

At 105.6 carats it is one of the largest cut diamonds in the world. The discovery of the diamond isn’t documented, but it’s thought to have been mined in India in the 1300s.

It’s changed hands many times since then, but it’s now part of the British Crown Jewels collection. How much is it worth, I hear you thinking? Well, it’s so incredible that nobody has put an estimate on it, making it officially priceless.

Our next entry is less glamorous than diamonds but much more expensive. Californium 252 is the most expensive chemical in the world, selling for $27 million per gram.

Nobody actually buys it by the gram though – it’s sold by the microgram, which would set you back a much more reasonable $27. Californium 252 is used in the treatment of certain types of brain and cervical cancers and in the cement and coal industries.

It’s also used inside nuclear reactors as a neutron start-up source. Californium 252 is so expensive because its production requires a nuclear reactor or a particle accelerator. It’s highly radioactive which makes it extremely difficult to transport, which also adds to its high price.

Its limited availability also contributes to the massive cost, and it wouldn’t be possible to buy a gram even if you did have $27 million, because the global annual production is said to only be around half a gram.

Any guesses as to what the most expensive material on Earth is? At an unbelievable $62.5 trillion per gram, it’s antimatter. Antimatter is the stuff that sci-fi is made of, but it’s actually very real.

Antimatter particles are pretty much identical to their counterpart, which is simply called ‘matter’, but they carry the opposite charge and spin. And if the two happen to meet they essentially annihilate one another.

In fact, it would only take a gram of antimatter to produce an explosion the size of a nuclear bomb, but thankfully scientists have only been able to produce around 20 nanograms so far. That would only create enough energy to boil water for a cup of tea, which is much less scary. Even if you could afford antimatter, you can’t really buy it.

If you somehow managed to talk a lab into selling it to you, it would cost millions per atom and would be very, very difficult to transport home. But, you might actually already have some at home. Bananas produce antimatter. Granted, they produce it in incredibly small amounts, but still – it’s kinda cool to think you have antimatter in your fruit bowl, huh?


If you end up enjoying this post, let us know in the comment section, tell us what you would buy if you were rich!

Why is Elon Musk and Space X Keeping this a Secret

Astronomers: “The Most Dangerous Objects In the Universe”

Researchers Prove The Universe Has An End?

Top Weirdest and Hotest Toilets Ever Made in this Decade