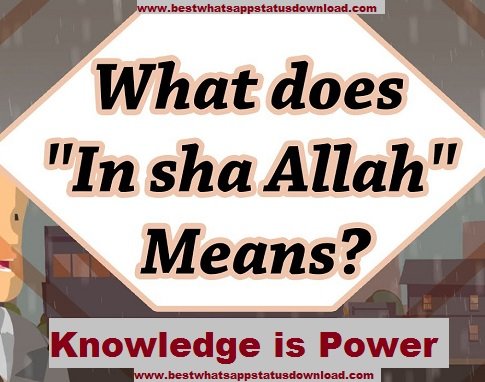 “I seek refuge from the Accursed Shaitan” 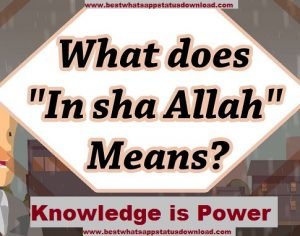 Asslamu Alaikum – “Quran Weekly” we have reached the half-way point – the 15th Juz – we’re in Surah Kahf and I shared with you the 22nd and the 23rd Ayat of the Surah actually no, the 23rd and the 24th Ayat of the Surah and these are about the phrase “In sha Allah” that you and I say all the time.

Allah says: [wala taqoolanna lishayin] “don’t you dare say about something” [innee fa’ilun thalika ghada] “no doubt about that, I’m gonna do that tomorrow” don’t say it about anything – like anything don’t say: “i’m gonna do this and this in the future” “for sure man, I got this” “I got this, In sha Allah” [illa an yashaa Allahu] “except that Allah wills” that “I’ll do this for sure, except if Allah wills” that’s the phrase that you should say “i’ll do this if unless Allah wills otherwise” in other words,

I have full intention of doing this and the only thing that will get in the way is if Allah’s plan is different from my plan that’s not under my control that is the intention of saying “in sha Allah” [illa an yashaa Allah] unless Allah actually wills otherwise now, when we say In sha Allah, we say “I’ll do this if Allah wills” – we say it in the positive sense “if Allah wills this will happen, but I’m making my commitment” but you know what we’ve done?

“O my Lord! expand me my breast; and ease my task for me;and remove the impediment from my speech; so they may understand what I say” and praise be to Allah and blessing and peace be upon our Prophet Mohammed, his family and his companions and the people after them.

we have taken “In sha Allah” as the ultimate religious “I am probably not gonna do this” translated “In sha Allah” “hey brother, are you coming to the program?” “yeah, In sha Allah” “are you gonna be able to make the deadline?”

they fulfill their promises when they make them and if and when they get into an agreement they stick to it so if you have an agreement, you cannot just use “In sha Allah” to say “well…..”

that’s my way of saying “probably not” don’t do that – don’t use “In sha Allah” like that however you should use it in the correct meaning and with correct belief – and what is that? “I’m gonna do my best to make it to this meeting/ appointment/ class” “and the only thing I can’t control is the will of Allah”

Because if Allah decides there’s gonna be a storm tomorrow or my car is not gonna start or I’m not gonna be healthy enough to wake up I don’t know any of those things that is the will of Allah, but to the best of my efforts I will do this and you know, if you show laziness on your part Allah didn’t put any obstacles in your path in doing what you said you would do and then you turn back and say “well,

“In sha Allah” it is not an acknowledgement that this might not happen it is only an acknowledgement that things ultimately are in the hands of Allah but we will do whatever we can to complete our word may Allah make us a people that respect the phrases that we use everyday like “Alhamdulillah” like “In sha Allah” like “Astagfirullah” and we use them in the way they’re supposed to be used especially “In sha Allah” especially when it comes to your future obligations and meeting the expectations that you’re supposed to meet.

May Allah bless me and you and peace, mercy, and blessings of Allah be upon you.