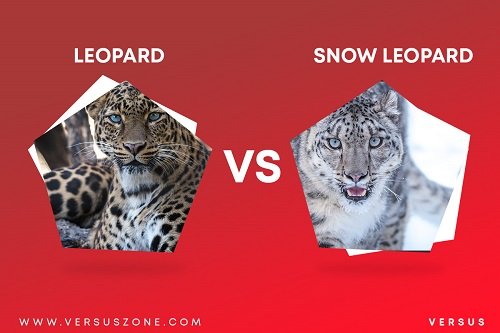 There are different types of animals, wild animals and pet animals. You cannot set any wild animal as you pet but in rare cases. Lions, tigers and leopard are belong to wild animals and have similar looks. Today we are talking about Leopard and Snow Leopards. Following is the comparison between them.

Snow leopard and leopard are types of wild cats. Leopard is widely distributed in Africa and Asia, while snow leopard can be found only in small parts of Central and South Asia. Leopard inhabits steppes, rainforests, temperate forests, grasslands, semi-arid areas and mountains.

Snow leopard lives in cold and dry mountains on the altitude of 9800 to 17000 feet. Number of both snow leopards and leopards has been drastically reduced in the past couple of decades due to uncontrolled hunting (because of their fur and body parts) and habitat loss.

Snow leopard is active at dusk and dawn. It often eats wild goats and sheep and occasionally hares, rodents and birds. Snow leopard can leap 30 to 50 feet to catch its prey. Leopard is active during the night. It usually eats mid-sized antelopes, monkeys, reptiles, amphibians, birds and fish. Leopard often hides its prey in the trees.

Snow leopard can reach 6 to 7.5 feet in length and 77 to 120 pounds of weight. It has stocky body, long tail and powerful hind legs with large furry paws which facilitate movement across the snow.

Leopard can reach 5 to 8.5 feet in length and 51 to 201 pounds of weight. It has large head, long body and relatively short legs.

Pregnancy in snow leopard lasts 3 to 3.5 months and ends with 2 to 3 cubs. At the age of three months, young snow leopards are ready to accompany their mother on the hunting expeditions. They stay with their mother during the first winter. Pregnancy in leopard lasts 90 to 105 days and ends with 2 to 4 cubs. Young leopards grow quickly and develop hunting skills early in life, but they usually stay with their mother until the age of 18 to 24 months.

The Mitfords: Communism Vs Fascism In The English Aristocracy | Tale Of Two Sisters | Timeline