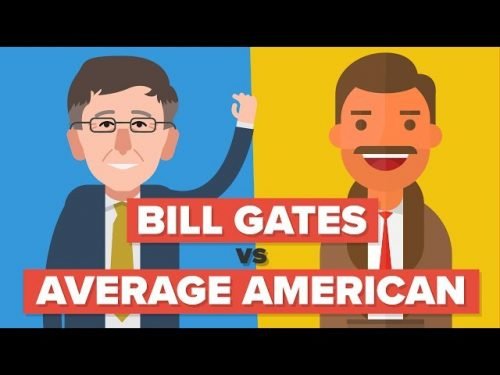 William Henry Gates III, aka, Bill Gates, currently ranks in first place on the Forbes list of the world’s billionaires with an estimated worth of 86.9 billion dollars. Nicknamed ‘Trey’ throughout his early childhood, the man who co-founded Microsoft and created the Windows operating system, seemed destined as a precocious yet sometimes troubled youth to become a pioneer of computer technology.

Gates could be said to be the apotheosis of computer programming, a demi-God of Geekdom, but what does this prevailing pioneer have in common with us common folks?

Let us find out in this post of The “Versuszone“, Bill Gates vs the Average American.

Born on October 28th, 1955, in Seattle, baby Bill, the second of three children, weighed in at 9 pounds 13 ounces. This is just over 2 pounds above the average weight of an American newborn.

His father, also named Bill Gates, was a successful lawyer, and his mother, Mary, was a prominent businesswoman. The Gates’ ancestry is German, Irish, and Scottish-Irish. As a white American, Gates belongs to 72.4 percent of other white Americans that currently make-up the U.S. population.

His German and Irish ancestry also makes him part of the two largest ancestral groups in America, at 17.1 percent and 12 percent, respectively. Notwithstanding Gates’ inarguable status as a superlative genius, the parts of his body outside of his brain are very much average. Gates stands at five feet nine and a half inches, which is just above the American average for a man.

His figure is on the slight side, with him weighing in at around 141 lbs (64kgs). The average weight for an American male is somewhere between 167 lbs (76kgs) and 185 lbs (84kgs), although according to normal weight range ratios, Mr. Gates can feel assured he fits snuggly within the parameters of what is considered a ‘safe’ weight.

With light brown hair, blue eyes and size 9 shoes, Gates has the most common hair color in the USA and the second most common eye color. He also departs from the average man regarding shoe size, with size 10 being the median for an American male. Where Bill Gates overrides his rather normal physical characteristics is in the realm of his intelligence. While Gates’ IQ has been a matter of debate, it’s thought to be in the region of 160.

Gates, however, has never confirmed this publicly. When asked by NDTV in 2012 what his IQ was, he skirted around the answer, stating “I did well” when he took IQ tests, adding, “I’m good at those goofy questions.”

But just for fun, let’s say Gates’ IQ is 160; that would put him way above the American average of 98. It would also secure him a place in the world’s High IQ Society, putting him in the 99.99th percentile of eggheads. Not surprisingly then, we learn that at his school, Lakeside Prep, he used what was then considered a “far-out” machine to create a computer Vs. human game of tic-tac-toe.

The school was so impressed, they allowed him to write the code for scheduling classes. Gates, a rebellious iconoclast from a young age, then was said to have written the code so that he was put in classes with a “disproportionate number of interesting girls.”

This went against averageness in every way, as in those days not only was kids writing code unbelievable, but most humans didn’t know what computer code was. He made $4,200 from the school for his first computer program when he was just 17. That was in 1972, when the average yearly American wage was $7,133. He also got banned from programming at school with his friend and co-founder of Microsoft, Paul Allen, as the two had exploited the code to gain more computer time.

In spite of his disregard for school rules Gates did remarkably well on his SATs, scoring a 1590 out of 1600. This put him in the 99th percentile of test takers, with only 1149 other students from 1.67 million testers being able to do as well as he did. Incidentally, his good friend Paul Allen and future business partner did even better, attaining a perfect score. On seeing the young Gates proclivity for programming, he was granted a place at Ivy League Harvard University.

As of 2013, 65.9 percent of Americans achieve entrance at university level. Getting into Harvard, however, is no easy feat with the admission rate for 2020 standing at 5.22%. This didn’t seem to have much impact on our young soon-to-be entrepreneur, who dropped out of Harvard to devote himself to what would become one of the world’s most recognizable corporations.

Dropping-out of university in the USA is perhaps more common than you may have thought, with more than half of enrolled university students deciding not to finish their degree – in one sitting at least. When Gates and Allen started Microsoft in 1975, Gates was just 20 years old. While the tech industry is renowned for some of its most successful entrepreneurs to have started young, this is still today a fairly ripe age to start a company.

Aside from his brushes with the law, Gates was making hay while most of the world wasn’t even aware the sun was shining on a place we now know as Silicon Valley.

Gates built IBM’s MS-DOS operating system in the early 80s, giving him his first windfall of $50,000 – a measly sum in retrospect considering what was about to happen. He held on to the copyright of the software, and when PCs started becoming a feature in households all over the world, the Microsoft empire was on its way to becoming a technology monopoly. Soon after Microsoft created its first Windows operating system in 1985, 90 percent of PCs worldwide would be running it.

Still, it’s thought that only about 8 percent of American households had a PC back then. Windows 1.0 was $99, and it would make Gates a small fortune. Windows 1.0 became Windows 10 in 2016, and billions of dollars had been made by a once precocious little Bill.

He’s donated billions to charity, appeared on The Simpsons – as every tech geek seems to do – and throughout it all, he’s held onto a childish curiosity. When asked about religion and the meaning of life, Gates has been vague, once saying,

“The mystery and the beauty of the world is overwhelmingly amazing, and there’s no scientific explanation of how it came about.”

There’s an anecdote people like to tell which states that Bill Gates makes so much money, over a hundred dollars a second, that it wouldn’t be worth his time to pick-up a hundred-dollar bill if he dropped one. But Gates is no believer in the supposition that lots of money makes you happy. In fact, he says he’s only leaving his children about $10 million from his fortune, once saying,

“Leaving kids massive amounts of money is not a favor to them.”

Regardless, his three children should do ok, considering the US Census Bureau says the average salary in America is $35,000 a year. That’s $1,400,000 for 40 years’ hard graft. While Gates is not an ostentatious spender, he likes his cars. He’s said to sometimes drive his Ford Focus to work, but his most cherished vehicle is his $225,000 Porsche 959. He owns 23 cars altogether, a few more than the average American household, which owned 1.927 cars in 2013.

According to Gates, his “big splurge” is his private plane, but the Gates main property was hardly a paltry acquisition. His mansion in King County, Medina, is said to be worth a princely 120 million dollars, compared to the average house cost in the USA of $188,900 – in 2014 at least. For all his grand accomplishments and indisputable genius, Gates likes to maintain that he is just an average guy.

He says he is fond of indie band Weezer, and has a liking for watching re-runs of the spoof documentary, Spinal Tap.

“Money has no utility to me beyond a certain point,” Gates has said, along with “I do the dishes every night.”

This is perhaps testament to the fact that the techno-God keeps his feet firmly on the ground. So how do you compare to the man from Seattle?

Let us know in the comment section of this blog post! And if you like these types of comparisons, be sure to check out our other Blog articles, Donald Trump vs the Average American.