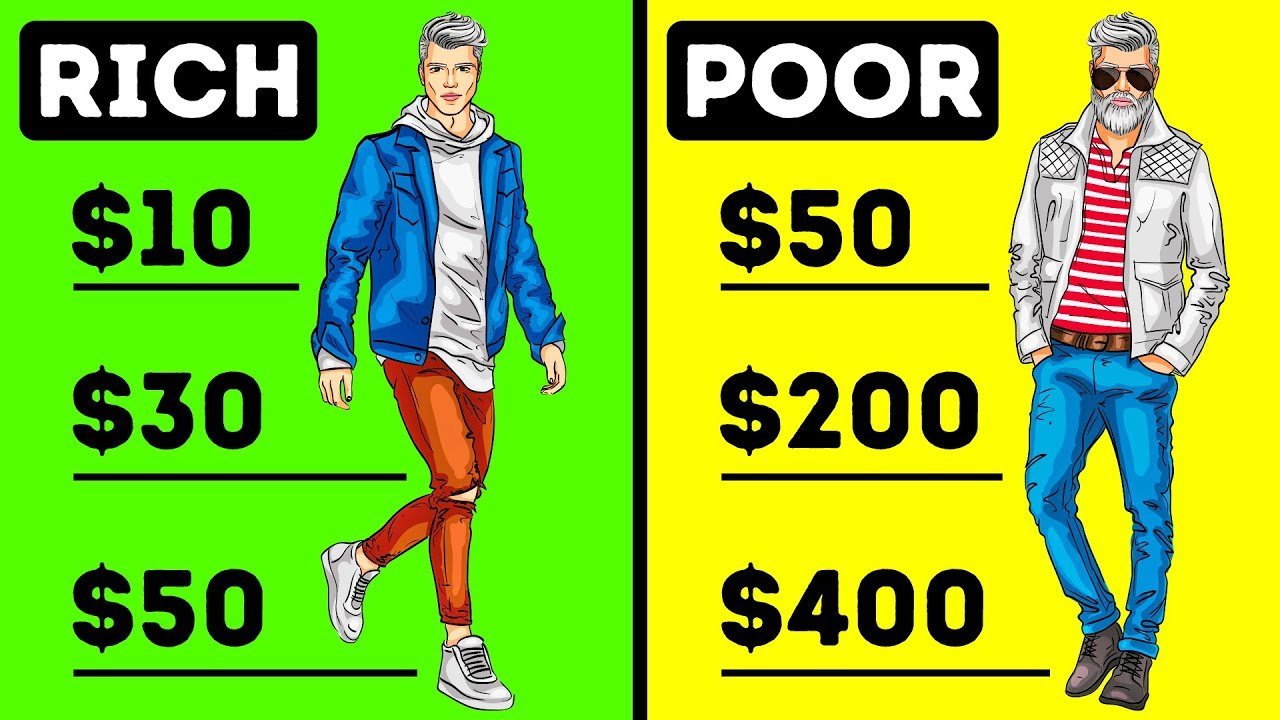 From the way they dress to the way they invest, these are the biggest differences between rich and poor people:

One of the most common mistakes made about rich and poor people is that the rich buy expensive clothes. When they are already well-established and rolling in the dough they might buy some extravagant garments; however, they will usually opt for the more affordable items that are still of good quality instead of blowing cash on things simply because they’re name-brand.

Poor people will often spend more than they should on clothes so they can appear wealthy; but, this is all a facade, and they’re wasting their hard-earned funds by doing it. This doesn’t mean you should purchase items that won’t last long. But, if you choose the 50-dollar Levi’s over the 1,000-dollar Gucci jeans, then you’ll be saving money without giving up quality.

Another difference between rich and poor people is their spending habits. This one might seem pretty obvious, but it makes a significant distinction concerning between getting rich and going broke. Just like it says in the book The Millionaire Next Door: The Surprising Secrets of America’s Wealthy, wealthy people spend less than they earn. In the book, the authors also discuss that one must avoid buying luxury items and living an indulgent lifestyle. This point goes along with our previous section concerning clothes.

Don’t spend more money than you have to keep up false appearances; this will only dig you into a hole. Overspending on lavish products becomes a difficult habit to break; so, it’s best not to start in the first place. Instead of thinking about all of the stuff you could waste your money on, think of everything you have to earn in the future by spending and saving your cash wisely. When you get some money, ask yourself, are you immediately thinking of what you could spend it on, or, instead, on what you could invest it in?

Something else that sets rich people apart from poor people is their outlook. Rich people have goals set and will do anything within reason to achieve them; so, if they are presented with an obstacle on their way to success, then they view it as an opportunity. They tell themselves, “By overcoming this task, I will further prove myself and will be closer to achieving my overall goal.”

Poor people often view these hurdles as something they can’t conquer; they spend too much time worrying about the issue instead of getting past it and moving forward. This is self-sabotage, and people are generally more capable than they believe. The wealthy try to stay positive about all obstructions, whereas others exhibit a negative mindset, which can only lead to an adverse outcome.

This has a little to do with people’s outlooks on various things. If you assume that something unfavorable will happen if you try something new, then you are less likely to do so. Another thing that the rich do is take risks when they’re necessary. They are willing to make changes or take opportunities that can profit them later on. For example, poor people tend to keep their current jobs instead of trying to land new, better-paying ones or ask their bosses for a raise.

They are frightened of the possible outcomes, like new employment not working out or their boss denying them a higher wage; whatever the case, they won’t get anywhere without taking a chance. Rich people, on the other hand, will be bold and try for more rewarding opportunities even if they’re uncertain things will go their way.

Speaking of taking risks, another thing rich people do is invest. Investing is a way for people to have their money do the work for them; they’ll earn more by doing this than they would by collecting interest on whatever they have in their savings account. Now, this isn’t necessarily as easy throwing your extra cash at the first opportunity you see. It will take some research and knowledge in the area for the expenditure to pay off. But, if you take the time to learn, then you will profit. Plus, wealthy people put money aside specifically for investing; you can’t contribute anything if you have no money to do so.

To make sure you have the means to do this, you have to avoid spending your cash on stuff that you don’t need and things that are unlikely to benefit you. For instance, poor people buy lottery tickets pretty often in hopes to get rich quick; however, the probability of this working out is slim to none, and the winners usually go broke quickly anyway. So, they’re investing small amounts repeatedly with no return. that’s no way to bring in the big bucks.

Another big difference between rich people and poor people is their health. Wealthy people are often more focused on their physical and mental health than people who are struggling financially. This is because if you take good care of yourself, then you will perform better; this applies to work, your personal life, and virtually everything you do during the day. Ways to keep yourself healthy include regular exercise, a normal sleep schedule, check-ups with your doctor, and eating nutritious foods.

Although it isn’t always by choice, many poor people consume fast food and unhealthy snacks; this prevents them from doing the best they can and promotes laziness. Do you ever feel energized and ready to accomplish tasks after guzzling down a Big Mac? I didn’t think so. Picking wholesome foods will make you feel motivated, and you’ll be more likely to meet your daily goals.

Something else that separates the rich and poor is what they spend their money on. We’ve already talked about how wealthy people spend less than they earn as well as how investing can help you save money. Well, this difference combines both of those things. Rich people will pay the extra money on quality items that will save them cash in the long-run. For example, buying a good coffee machine for your home will prevent you from purchasing a 5-dollar latte from Starbucks. So, even if the cost seems significant up front, you’re saving a lot.

Even if you opt for a fancy cappuccino maker for around 800 dollars, it’s less than the 1,000 dollars or more you’d pay by purchasing a coffee daily from a cafe. Another big money-saving item is LED lights. A lot of people pick out the cheapest bulb when they need a replacement; but, don’t just grab whatever costs less. If you spend the extra cash on an LED light bulb, then you’ll be saving energy and saving your wallet.

Not only are they more energy efficient, but they also last much longer than incandescent lights; LEDs last for 20,000 to 50,000 hours and incandescents last for 1,000 to 2,000 hours. So, don’t think that just because you’re paying less initially means you’re conserving money.

Another huge thing that separates the rich and poor is their money management skills. We’ve already hit on this a little in our previous segments, but it is a critical aspect of being wealthy. You have to be able to manage your money wisely. Of course, this applies to spending cash on frivolous items, which you shouldn’t do; but, it also means dealing with all aspects of keeping your finances on track.

One of the biggest mistakes people make is to use their credit cards to pay for things they couldn’t afford otherwise. Poor people will often use credit to make up for what they lack in cash; this is a surefire way to end up with debt, especially when you have to pay interest and fees for carrying a balance. The best way to use a credit card is to pay it off at the end of every month; so, make sure that you have the money to do so. Rich people always ensure their cards are paid; thus, they don’t have debt and can maintain a good credit score. Managing your finances also means budgeting.

Rich people will set budgets for themselves every month; they’ll determine what percentage needs to go to savings, to investments, to themselves, and then they decide what they can spend on other things. Poor people don’t make monthly budgets; this means they often lack money for investments and savings. It also means that they might not be able to afford their bills and will resort to credit cards once again. They spend the majority of their cash as soon as they deposit their paychecks, often on things they don’t need. So, remember to pay off credit cards ASAP, make monthly budgets, and do what’s important before you use all of your funds on nonessentials.

Like we discussed in the section about managing money, rich people spend money on unnecessary stuff only after they’ve accomplished everything important. They will make sure that everything they need is taken care of before they drop cash on entertainment. They won’t even watch television before they have completed their serious tasks. It isn’t until everything is done and they’ve contributed to their goals that they’ll enjoy a show on Netflix or go out with friends. Poor people frequently do the opposite.

They spend the time they could use to advance their lives on their couches playing video games or binging shows; they might even spend this time going out to a bar, resulting in a waste of money too. Plus, procrastination is one of the most significant factors that hold people back from becoming wealthy. Putting things off for the sake of a TV show won’t help you increase your financial standing.

Their sources of income also separate wealthy people and poor people. Poor people usually have a single job, meaning they only have one source of income. This isn’t good for a couple of reasons; first of all, they aren’t making as much money as they could be. Secondly, if they lose their job or have to leave it for some reason, then their income flow stops altogether, and they’re in serious trouble.

The rich have numerous income sources. They have a job, of course, but also have money coming in from their investments and are profiting from other forms of passive income. One way to make passive income is to buy and rent out a property or even rent out a room in your house.

Another way is to create a blog; it will take time to gain followers, but, once you do, you’ll be able to make money from companies advertising on your page. You can even allow people to place ads on your car; so, while you’re driving around during your daily errands, you are also making money.

Perhaps the most substantial difference between rich and poor people is their commitment. Wealthy people are determined to become prosperous by any means necessary… as long as it’s legal, of course. They will make large investments that will pay off in the end, like schooling. They attend university, obtain their degrees, and pursue their careers until it pays off for them.

There is no stopping them, and they’ll stay motivated throughout the whole process. Rich people are also willing to put in the extra effort; this means staying past your scheduled hours at work. It’s true that nobody wants to do this, but it is necessary for achieving your goals. They also accept the fact that becoming rich quick isn’t going to happen… at least for most of us; it is going to take a lot of time, work, and drive to get where they want to go.